Soon after Eileen Garrett (1892-1970) was born in Ireland, her parents committed suicide; she was raised by her aunt. An unhappy child, she went into a world of her own and dissociated from surroundings. Garrett started to see apparitions, hear voices, enter trance states, and predict future events.

In the 1920s, she attended the British College of Psychic Studies in London. Considered a trance medium, she began channeling Uvani and Abdul Latif, controls who directed communication between Garrett and other entities wanting to speak through her. Garrett, not a follower of Spiritualism, admitted some doubts about the survival of consciousness after death. She came to believe that her trance voices were from her subconscious, formed by inner needs.

Garrett’s skepticism about her psychic abilities captivated Harry Price, Spiritualist debunker and psychical researcher. In 1930, he arranged a séance for her. Uvani brought through the deceased pilot of a crashed blimp, fallen in France two days earlier. She channeled accurate technical details, which caught reporters’ attention. Though dismayed by her sudden fame, the following year Garrett came to the US to lecture nationally for the American Society for Psychical Research.

In the US, Garrett worked with Society researchers and with William McDougall and J. B. Rhine at Duke University. She participated in long-distance telepathy, automatic writing, and trance medium research. At European centers, she took part in research related to poltergeists and other paranormal phenomena. When in France, she worked with the Resistance before returning to the US in late 1940.

Living in New York, Garrett had many high-profile clients and friends, including Aldous Huxley, Salvador Dali, Henry Miller, and Anais Nin. With financial support from her friend Frances Bolton, Ohio congresswoman and Rockefeller heiress, she edited Tomorrow Magazine and founded Creative Age Press – the only woman of her period to own a publishing house. In 1951, with Bolton’s help, Garrett started the Parapsychology Foundation. It funded some of J. B. Rhine’s early ESP studies, Ian Stevenson’s examination of reincarnation, and the US government’s early interest in remote viewing.

The Foundation also sponsored international conferences and ensured that research results were publicly available. It published the quarterly International Journal of Parapsychology, plus a bi-monthly newsletter, a series of monographs, and conference proceedings. It held lectures in its large library. Garrett always wanted to bring together various disciplines to look at psi phenomena. She didn’t want parapsychology to be talking to itself.

Garrett was dedicated to understanding the psychological, physiological, and biochemical correlates of mediumistic and other psi phenomena. “I have a gift, a capacity – a delusion, if you will – called ‘psychic,'” she wrote in Adventures in the Supernormal. “I have been called many things, from a charlatan to a miracle woman. I am, at least, neither of these.” According to Lisette Coly, current President of the Foundation, “My grandmother used to say, ‘Monday, Wednesday, and Friday I believe in the paranormal. Tuesday, Thursday, and Saturday I don’t. And Sunday I don’t give a damn.” Garrett’s larger-than-life personality inspired the well-known Broadway character of Auntie Mame; under the pseudonym Patrick Dennis, a Parapsychology Foundation assistant wrote the original novel.

Today, the Parapsychology Foundation has the largest collection of parapsychological books and materials in the US and one of the largest in the world. Their mission continues to be that of supporting the study of psi. Thanks to Eileen Garrett and Frances Bolton initially, followed by daughter Eileen Coly and grand-daughter Lisette Coly, over the years numerous researchers in the field have benefitted from its presence and activities.

A research assistant at the Maimonides Medical Center (late 1970s), Dr. Drucker tested children for psychic ability with Athena Drewes, and became a member of the PA based on related publications. In 1991, they published Parapsychological Research with Children: An Annotated Bibliography (Scarecrow Press). She taught at the Summer Study Program and at the Rhine Research Center and was an editor of the Journal of Parapsychology. Currently, she sits on the board of the Rhine Research Center. 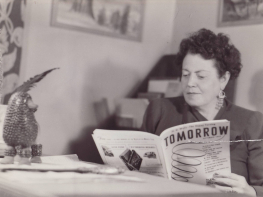